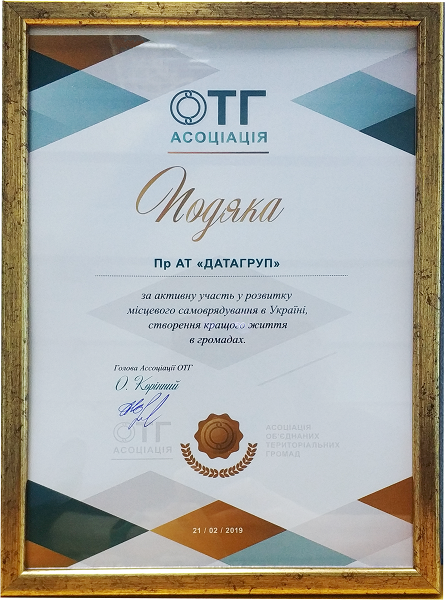 On February 21st a General meeting of the Association of united territorial communities was held at the Ukrainian house. Datagroup supported the event and presented innovative solutions in areas of “Safe city”, “E-medicine” and “Internet in schools”.

The event was attended by around 300 heads of territorial communities, as well as by Prime-minister of Ukraine Vladimir Groisman, vice-prime minister and minister of regional development, construction and housing and communal services of Ukraine Gennady Zubko, Sergey Vlasenko and others.

Event has began with a panel discussion with Vladimir Groisman: “Local government Reform and territorial organization of power. New stage. Challenges and prospects” . During his speech, Prime-minister of Ukraine, said: “Community Development is a priority. I want to create a new quality of education, medicine, infrastructure and national economy. We have a great future. But the basis for effective achievement of goals is a local government".

During the event, community representatives noted that without modern technology and the corresponding conditions it is impossible to create a quality system of education, to increase the level of security in the settlements and to create an appropriate level of health-care. Each of these initiatives requires high-quality communication in small towns and villages. Datagroup is the only operator that can provide satellite Internet in the most remote corners of the country and implements important social projects as “Safe city” and “E-medicine”.

At the end of the event, representatives of the Association of united territorial communities has summarized results of activity in 2018, and Alexander Korinnyi, chairman of the Association, expressed gratitude to the representatives of the company Datagroup for their active participation in the development of local self-government in Ukraine and create a better life in communities through the introduction of modern technologies.