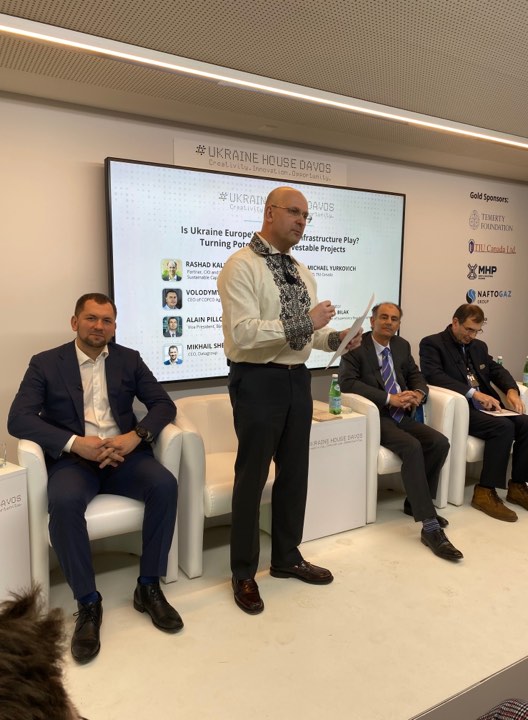 House in Davos as part of a podium discussion on “Is Ukraine the last powerful infrastructure platform in Europe? Transformation of the country's potential into investment projects ". The panel was moderated by Danylo Bilak, the Chairman of the Supervisory Board of UkraineInvest. Together with Mykhailo, COFCO Agri Ukraine CEO Volodymyr Osadchuk, EBRD Vice President Alan Pilu, TIU CANADA CEO Michael Yurkovych, Blue Like An Orange Sustainable Capital CIO and founder Rashad Kaldany took part in the discussion.

During the discussion, Mykhailo was asked how important the company's role is in developing the country's infrastructure. Therefore, the CEO of Datagroup dedicated the beginning of his speech to the description of the telecommunications infrastructure, which in its turn becomes a driver for the country's economic growth and helps to digitalize the economy.

At the same time, Mykhailo stressed out that the last five years have been the most dynamic period for Ukraine in the development of telecommunications infrastructure, and now he sees many opportunities, highlighting three main and most promising areas for the country:

The first one is the establishment of the Ministry of Digital Transformation of Ukraine, as well as a subsequent statement by this ministry about 100% coverage of the territory of Ukraine by 3G and 4G connection and the planned provision of broadband Internet access to all settlements by 2023. The Internet has become a basic need for every citizen of Ukraine for a long time already. Therefore, business and the public sector must work together more often to ensure the Internet in every home. At the same time, we currently do not have accurate information about the real level of Internet penetration in the country (approximately it is about 60%). And now let's imagine that 10 million people in Ukraine live without access to Internet, and if we implement the Internet in all settlements, the model of doing business in these villages and towns changes accordingly, while improving the quality of life of each individual Ukrainian.

The second possibility is the implementation of the Safe City program, which is impossible without the introduction of modern technologies. Besides, we can already apply the international experience of implementing such programs. However, it is important that the Ministry of Digital Transformation becomes the single center for developing these technologies implementation methodology. And this, in its turn, will have a positive impact on the economy in general.

The third possibility is the services that the Ministry of Digital Transformation will implement: online learning, which is already being developed, e-medicine, basic digital literacy courses, etc. This is a big step for the government, which will allow to unite small villages and towns into a single digital space. As one of the leading telecom operators in the country, we promote these products and programs. The implementation of such projects allows business to create synergies with cities and jointly change the country for the better. Mykhailo also stressed out that the government should pay special attention to cybersecurity.

For the third year in a row, the Ukrainian House in Davos opens its doors during the World Economic Forum and demonstrates to the world the latest and greatest achievements of Ukraine's leading IT companies: the latest technologies, investment areas, etc. Its main topic in 2020 is "Ukraine: creativity, innovations, opportunities." The World Economic Forum in 2020 brought together about 3000 participants from 117 countries. The events were attended by leaders of 53 states and governments, including Austria, Germany, Greece, Israel, Italy, Spain, the Netherlands, Poland, the United States, Ukraine and others.
Davos was visited by billionaires from 36 countries, including Mark Zuckerberg, George Soros, Bill Gates. US President Donald Trump also delivered a speech at the forum on January 21.