The "Top 100. Ratings of the Largest" magazine has ranked the best managers of the country. Mikhail Shelemba entered the top three, taking second place in the ranking of the best CEOs of Ukrainian companies.

The experts chose Mikhail Shelemba for the successful transformation of Datagroup, constantly growing business indicators and operational efficiency. "High financial performance and rapid development of Datagroup helped to realize the company's strategic goals for M&A and an ambitious agreement - the acquisition of Volia," notes the expert jury of the rating. The European Bank for Reconstruction and Development (EBRD) supported the agreement by providing the company with a $65 million loan, which is the largest loan from the EBRD in the Ukrainian telecommunications, media, and technology sector. The experts also noted the company's large-scale project on the all-Ukrainian modernization of the network together with Cisco. Investments in the project amounted to $20 million.

At the same time, the editorial board of "Top-100. Ratings of the Largest" determined the winners in special nominations. Mikhail won in the nomination "Leader of Changes". Experts noted the ability of the CEO of Datagroup to effectively manage the company during the period of changes.

"This is another recognition of the successful work of our entire team, and high financial indicators confirm the trust and correctness of the choice on the part of our customers and partners. We want to continue to be the best partner for the corporate sector and the most convenient and innovative provider for our subscribers," commented Mikhail Shelemba, CEO of Datagroup and Volia.

"This is the most important issue of our magazine in the outgoing year. It is at the end of the year that the business compares its income and losses, and it is up to managers and their ability to adapt masterfully what that proportion will be," stresses Maxim Birovash, editor-in-chief of the rating magazine "Top-100. Ratings of the Largest".

The final list includes the participants who received the highest number of points from the expert jury. The long list of the "management" rating includes almost 200 CEOs from the largest companies in Ukraine, who were selected for the rating according to consolidated revenue for the past year. Candidates were evaluated according to criteria such as emotional intelligence, crisis management, use of innovations, leadership potential, and change management. 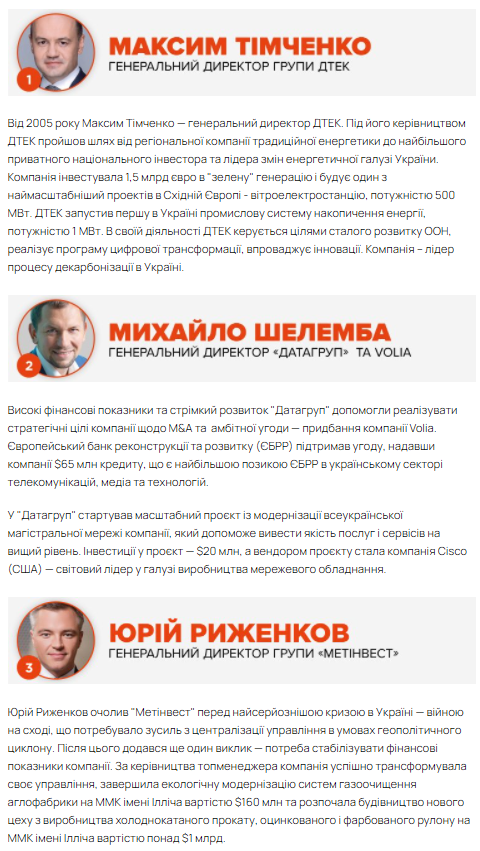